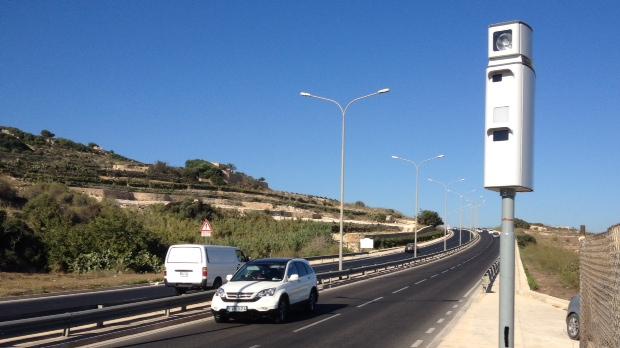 Earlier this year regulatory measures to control speeding on one of the longest direct routes in Malta was increased from one speed camera to a total of three. The Coast Road leading from Pembroke to Salina is known as a lovely ride which borders on the sea, however the speeding taking place on the road may discourage users from taking that route. It is also known for it's bikers joyrides on Sunday mornings which can pose some dangers given the high volume of motorcycles circling the area.
None the less, the improved tarmac and road quality since it's restoration has made it a more enjoyable ride, and with the new cameras safer too, right?

The original speed limit of the coast road is within 70km/hr with one directional recording of the former single camera placed on that road, which since has been increased to three, with respective speeds of 60km/hm. These cameras are placed around the area of Bahar Ic-Caghaq round about, and another prior to a steep bend towards Salini Resort.  However, since their installment some commentators on articles praising these incentives have been met with backlash stating that the downgrading of the speed limit is unjust, especially since one is after a roundabout and another is downhill, however wouldn't their installment still safeguard the driver from driving at a higher speed within these areas? Let us know your thoughts on these installments!