With the upcoming scholastic season fast approaching, many kids are eager to get back to a sense of normal in a classroom of peers. On the other hand, parents are dreading the morning traffic and seemingly never ending routes. 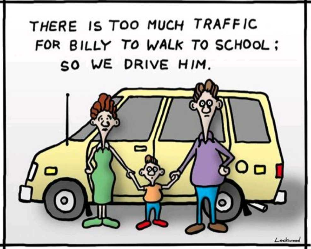 Meanwhile, many primary and secondary schools provide private coaches or minivans to make routes in the morning and after school to pick and drop off children, however those living closer to schools may not get involved in the routing. In turn, this would leave children at a disadvantage where they would require to take the dangerous approach towards their schools, which as mentioned, have ample busses and traffic coming to and from the building.

This leaves to consider, why the surrounding areas of schools aren't regulated for the wellbeing of their students, if not by designated traffic police, then by teachers or moderators within the area? This would help control the area and traffic flow, with students being able to take the short walking trip to and from by being escorted safely outside of the busy radius surrounding the school. This would strongly decrease the need for parents to drive short distances to drop off their kids, in turn diminishing the vehicles in the area and saving parents time in the morning also.

Join our discussion on what you think the best way to safeguard kids walking to school would be? Let us know in the comments below!