Speeding has been flagged as the second largest concern with regards to traffic safety in the European  Union (European Commission, 2010). In Malta, at least 3 persons a day require medical attention  following a traffic accident, which presently occur at a 30-minute interval (Transport Malta, 2019). In  2018 alone, 38 road fatalities were recorded, translating into 1 road fatality for approximately every  10,000 people. Unlike many other member states, this number has increased by 7 deaths since 2010 rather than decreased (European Commission, 2019).

Transport Malta (TM) quotes the primary cause of traffic accidents to be due to speeding (2019), yet  there is a lack of consolidated information regards national speed limits. Currently, existing speed limit  signs were allocated by local counsels without much scientific/technical analysis (Transport Malta,  2012) and a national speed limit framework is still in the making, thus leaving a gap in terms of a single  cohesive approach to speed limit management. The absence of such policies together with the shortage  of informative signs and materials, creates several potential hazards for anyone using local roads and  halts the implementation of a national speed enforcement policy and other road safety measures

This project aims at collecting existing speed limit signs along primary roads across the island, in order  to accumulate and publish previously missing data of local speed limits, which consequently is to be  used to raise awareness around speeding on the local roads and road safety. Moreover, the results  obtained from this exercise can be further used for a variety of purposes ranging from transport  research, cohesive transport planning, traffic data collection and vehicle tracking (e.g. Boosh support),  besides other proposed activities listed in the recommendation section below.

The main objective of the proposed project is the development of a transport map tile for Open Street  Map (OSM), including further information on Maltese roads. The project consists of data collection,  inputting this data into OSM, and examining the status quo of speed limit signs in Malta, whilst utilizing  the data to develop future projects around road safety for all modes of transport, including pedestrians.

Hence, the project aims to:

The project undertaken focused predominantly on the collection of speed limit signs along the Primary  roads of Malta. Based upon the road classifications provided by Transport Malta (2012) and OSM, the  Primary roads were identified accordingly. Since several Primary roads and villages were served by interconnecting roads, these Secondary roads were also mapped in order to create a more cohesive  picture of the road network and to compare differences in speed limit values assigned to Primary and  Secondary roads. Hence why throughout this document, Secondary roads will be referred to as partially  mapped.

Since the aim of the project was to produce an inventory of speed limit signs, it was concluded that a  field research approach was required alongside technical expertise of OSM. Field research would allow  for the gathering of the data as is available on the local roads at present, thus increasing the validity  and accuracy of the data inserted into OSM. The field research was carried out by mapping each speed  limit sign whilst travelling along Primary (and partial Secondary) roads by car. Mapping of each sign  was achieved by inserting the data in real-time into an App, specially designed for the field research.  The use of this self-developed App permitted for minimal interruption during driving to record the posted  speed limits, thus ensuring increased theoretical accuracy of up to 3 meters.

To complete this research, PAF acquired funding for a budget of 5000 Euros and hired two  collaborators. The first being a GIS specialist, who was responsible for the creation of the specialized  App needed for the field research and for entering the collected data into OSM, thus creating a map of  the Maltese roads. The second collaborator acted as a mapper placed in the field to collect the speed  limit data required using the aforementioned App. The research was carried out between May and  August 2019 and was further supported by several volunteers, who contributed additional speed limit  data on Gozo and other parts of Malta.

Once the field collection was completed, cross-verification of the data was carried out by PAF to confirm  data accuracy. The data was then converted into a visual map presenting an inventory of the speed  limits for Maltese Primary (and partial Secondary) roads. For further validation, the data was submitted  to the OSM community and will upon completion be uploaded onto the open source platform.

The aim of the project was to map the available posted speed limits along Malta’s Primary (and partial  Secondary) roads. In doing so, a visual representation could be created marking the existing speed  limit signs and their assigned values. Consequently, this data allows for a present-day picture of Malta’s  active speed limit structure, highlighting themes for further research and emphasizing the lacking  infrastructure required to adhere to European road safety regulations.

Although 100% of Maltese roads classified as Primary roads were mapped successfully, only 65.8% of  these roads had speed limits signs. This implies that large sections of these roads are left undefined,  hence it was not clear how far a speed limit’s value would be valid or even what the precise speed limit  was for a particular road. These issues were raised in a document by Transport Malta in 2014 and  remain so today. This posed an issue when inserting the data into OSM, resulting in some roads being  assigned “no posted signage” and other stretches of road being assigned the value of the last speed  limit point mapped. 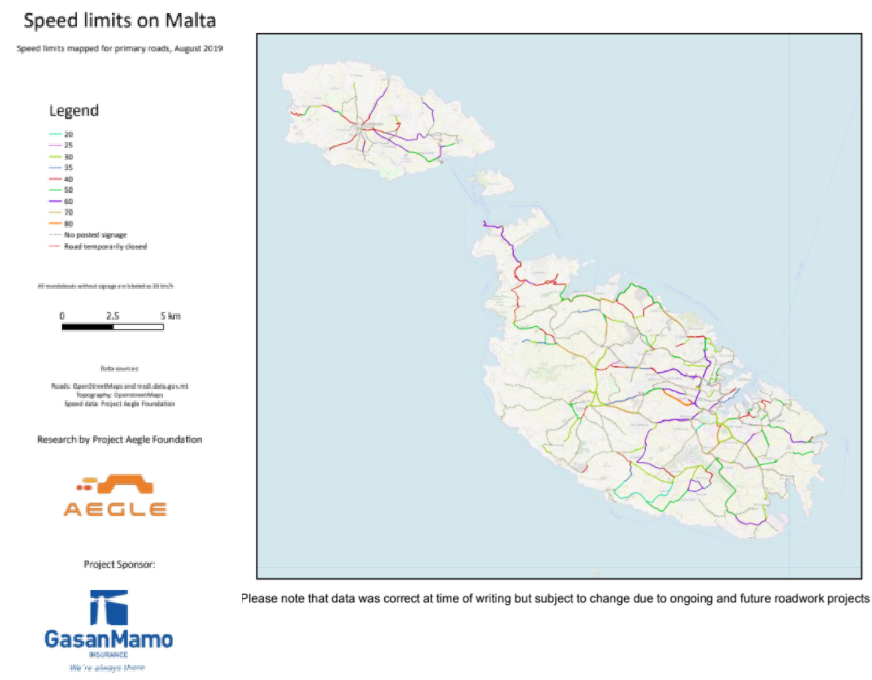 As listed in the previous section, several themes stood out as a result of the data collected and inserted  into OSM, which demand further attention.

Moreover, not following speed limits may also be further related to the deficiency of other speed limit  enforcements. It was noted that speed cameras are far and few between, leaving substantial stretches  of road unmonitored. In addition, certain roads having speed cameras did not have any posted speed  limits signs, which confused drivers who visibly were unsure on how to behave regards their vehicle’s  speed. Several pedestrian crossings also pose a concern as drivers are not notified that such a crossing  is approaching, and that the driver should slow down. Nor were any further speed limit enforcements  present, such as sleeping police, which could forcibly slow the vehicle down if need be.

Another theme that stood out was how to effectively match a speed limit to a Primary road, keeping its  topography and the surrounding infrastructure in mind. It was observed that some Primary roads cut  across village cores, yet no indication of a change in speed limit was noted. This was also the case  when the topography of the Primary road was reminiscent of a more rural configuration. In both cases  it can be argued that these roads were assigned theoretically higher speed limits than the physical  infrastructure could safely permit.

Lastly, when one steps out the driver’s seat and adopts an alternative mode of transport, such as  walking or cycling, the current speed limit system would fail them enormously. As it stands, car users  are at high risk of accidents caused by over speeding yet taking poor infrastructure and sporadic speed  limit enforcement into account, this risk substantially increases for anyone outside of a car.

From the results collected, it is evident that more priority needs to be given to speed limit posting and  enforcement. Malta requires a national speed limit management policy that will consequently facilitate  a standardization of road functions and design, opening the Maltese roads to other forms of transport  other than the private car.

Besides using this data to highlight the lacking infrastructure and the traffic related consequences  thereof in the media, further pressure can be placed upon the TM and other authorities to take more  action regards finalizing the national speed limit management policies and its implementation.

To complement this process, educational campaigns can be created to serve various spheres of  society, ranging from Road Safety lessons at school to national campaigns focusing on spreading  awareness of new policies and speed management strategies.

It must be noted that these recommendations go hand in hand. There is little use in educational and  awareness campaigns being run across the country without any efforts being made to upgrade and  firmly tackle current road infrastructure and speeding in a pro-active manner. This implies the  introduction of further speed limit enforcement strategies such as speed cameras, sleeping police,  higher fines and consistent presence of authorities on the road.

Here, this project can assist the ICT sector with regards to speed monitoring technology through the  data collected. Knowledge of the posted speed limits can thus facilitate in the development of  technology that could be implemented in vehicles to alert drivers of the speed limit and beyond.

Taking focus away from private cars and shifting it to more vulnerable road users such as pedestrians  is paramount. Every citizen is a pedestrian at some point in their day and frequently fall victim of the  current traffic situation, which is quintessentially car-centric, ignoring other modes of transport whilst  extending a sense of entitlement to car drivers.

PAF strongly believes that through increasing road safety for young and old, opportunities will arise to  enable a strong increase in multimodality transport. In turn, if roads can be safely shared by private  cars, pedestrians and cyclists, current traffic congestion, environmental and health issues will dwindle.